Comrade Sun Chao won the honorary title of "Chief Technician of Shandong Province" and enjoyed a four-year government allowance for high-skilled talents. Comrade Sun Chao graduated from Shandong Labor Vocational and Technical College majoring in metal cutting in 2002, and has been working in the company's machining workshop since the same year. 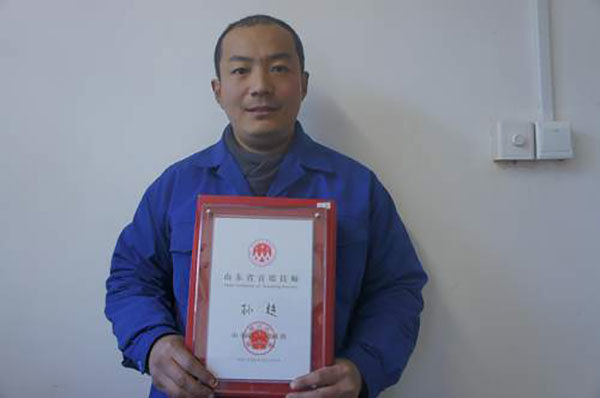 In 2003, the company purchased the first CAK6136A CNC lathe. After assessment and review by the leaders of the workshop, it was decided to let Comrade Sun Chao operate the machine. The comrade bought books such as CNC lathes and CNC machining programs from Xinhua Bookstore at his own expense, sacrificed his spare time, and through hard self-study and learning programming and craftsmanship, he quickly transformed the ordinary lathe technology into the CNC lathe technology, making various parts processing. The efficiency has been greatly improved, which has contributed to the company's production and operation.

Comrade Sun Chao studied hard, devoted himself to his post, and won many awards in various technical competitions. In 2006, he won the first place in the numerical control group of the first Lanxiang Cup Skills Competition in Jinan City; in 2008, he was named "Jinan City Outstanding Contribution Technician", and in 2010, he was named "Jinan City Chief Technician". In June 2014, Comrade Sun Chao He was awarded the honorary title of "Chief Technician of Shandong Province" by the People's Government of Shandong Province, and received cash rewards from the company.

In order to give full play to the leading and demonstrative role of the chief technician, guide and motivate the majority of front-line employees of our company to stand on their posts, study technology, start a business, and strive to make contributions, the company will actively create favorable conditions for Comrade Sun Chao to "pass on stunts and lead masters", Regularly organize regional and industry exchange activities.

The company calls on the majority of employees to take Comrade Sun Chao as a model to learn from, be dedicated to their jobs, be brave in innovation, strive to improve their own skills, and make contributions to the development of the enterprise. At the same time, I also hope that Comrade Sun Chao will carry forward the backbone and leading role of the provincial chief technician, further carry forward the spirit of the chief technician, cherish honor, guard against arrogance and impatience, unite and lead other personnel to create new advantages, create a new image, and make contributions to the sustainable development of the company. greater contribution.